skip to main | skip to sidebar

Update on my MTM experience

At one point, I had formed an LLC with the intent of providing MTM services to local self-insured employers in an attempt to help them control their health care expenses and to decrease absenteeism due to preventable complications from chronic illnesses.  The idea was to basically conduct comprehensive medication reviews with high-risk employees and educate them to improve adherence.  I contacted in excess of two-hundred companies and local governmental bodies.  There were phone calls and meetings to educate the decision-makers on how meeting with a pharmacist regularly could help the employees and employers.

Two things always prevented the contract paperwork from being signed…lack of recognition as providers from the insurance companies and lack of hard data on the financial impact that pharmacists could make.  We’ve been told for years about the successes of the Ashville and Diabetes Ten City projects, but I have yet to see any hard numbers on the actual impact that has been made.  That lack of data was a sticking point with the companies.

So after several years of trying to make a go of contracting directly with employers, I gave up.  Since there had not been any progress on obtaining provider status (other than having members of Congress sign on as co-sponsors to a bill that never gets to the floor for a vote) I didn’t see the point of continually spinning my wheels only to get nowhere.

At the same time, I left the retail world to take a director of pharmacy position at a local critical access hospital.  During the interview process several physicians discussed opening an anticoagulation clinic.  That sounded like a neat idea to me.  I would be able to actually work directly with patients to help improve their medication adherence, which was the whole idea behind MTM when it was initially discussed.

As you can imagine with hospital politics, it took a while to get the anticoagulation project moving.  I had spent several months working on the project and was told to put it on the shelf.  To say that I was mad would be an understatement.  I grabbed all of the work that I had done and almost threw it into the trash can.  Instead it found the bottom drawer of a filing cabinet.

Shortly after the project was put on hold, it was resurrected.  A few road trips ensued to see how other facilities were operating their anticoagulation clinics.  I presented the clinic for approval and was given the nod to move forward.  This July we will be celebrating our second anniversary as a clinic.

Looking at how I would have been practicing MTM if I had been successful with first venture vs what I am doing now, I would have to say that I am much more satisfied with what I am currently doing.  I am actually managing the patients’ medications through the clinic.  Through the collaborative practice agreements that I have signed with the physicians I am able to adjust therapy as I see fit instead of faxing a recommendation off to a practice and hoping the nurse or MA will give it to the physician, who may or may not agree with me.

It is my hope that pharmacists are granted provider status so other pharmacists can enjoy their profession as I have been able to over the last two years.  When you are able to see how a patient’s quality of life changes due to the impact of your professional skills, you get the warm fuzzy feelings.  Not to knock comprehensive medication reviews, but you don’t see the impact when you only see the patient once (maybe twice) a year.

I encourage all pharmacists and students to contact their representatives to have them sign-on to the bill that has pushed forward.  But don’t stop and be content with having your Congressperson simply be a co-sponsor.  Contact the APhA and see what can be done to get the bill moved along to get a vote.

Posted by Eric Durbin, RPh at 9:35 AM 2 comments
Email ThisBlogThis!Share to TwitterShare to FacebookShare to Pinterest

Lately I've seen the following header on emails that I have received from the APhA regarding the push for provider status. Maybe you have seen it as well.


That's because you saw it here first...two years ago.


I'm kicking myself in the rear end for not trademarking or copyrighting the phrase.

I feel a little bit hurt that the APhA has stolen taken my phrase.


Maybe they will want to make amends by floating a free multi-year membership or a free trip to the annual convention my way.

Posted by Eric Durbin, RPh at 2:14 PM 4 comments
Email ThisBlogThis!Share to TwitterShare to FacebookShare to Pinterest

Any PPC/MTM success stories our there?

About a year-and-a-half ago I put up a post on providing pharmacist provided care (PPC) as opposed to medication therapy management (MTM).  Since that time I've had dozens of pharmacists contact me with their thoughts and plans for attempting to start a successful PPC/MTM business.

If you've contacted me and had success, please shoot me an email to let me know how things are going.  Let me know what has worked and what hasn't so I can share that information for others.  One of the problems that I see is that many of us are attempting to reinvent the same failed wheel.

For me personally, I have been able to open an outpatient anticoagulation clinic at my hospital.  We recently celebrated our first year anniversary.  I'll share on that sometime in the (hopefully) near future.

Until then, it's off to one of the kids' soccer/cross country/swim events and/or practices.
Posted by Eric Durbin, RPh at 7:48 PM 0 comments
Email ThisBlogThis!Share to TwitterShare to FacebookShare to Pinterest
Older Posts Home
Subscribe to: Posts (Atom)

Eric Durbin, RPh
I'm a pharmacist. After 16 years as a community pharmacist, I have moved on to become the pharmacy director at a critical access hospital. I've been on the hospital side for three years now and no matter where we work, there are issues that we deal with. I'm going to share my thoughts on issues that I think will help to advance the profession. 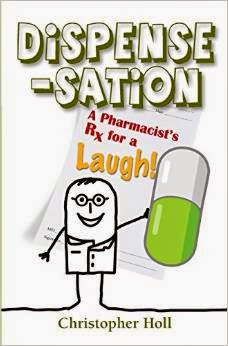